It seems like the Red Devils are linked with every top player rumoured to leave but one or two reports are gathering momentum.

The long-standing saga regarding Borussia Dortmund star Jadon Sancho will probably continue for most of the window but the Red Devils are very much favourites to sign the England forward, 20.

United have also been linked with Aston Villa captain Jack Grealish, although the latest reports suggest that could be on the back-burner with the club prioritising a Sancho deal.

But it’s not just Sancho who could become a United player this summer with Wolves hotshot Raul Jimenez ‘on his way’ to Old Trafford.

The Mexican, 29, fired in 17 Premier League goals in 2019/20. He’s comfortably behind top scorer Jamie Vardy’s haul of 23 but talkSPORT’s Jason Cundy believes Jimenez is on a par with the likes of Harry Kane and Sergio Aguero.

“He is too good for that Wolves side,” said the Sports Bar host.

“Is he a Champions League player, yes or no? If the answer is ‘yes’ then he has to be thinking bigger and better right now.

“I don’t doubt that Wolves are going in the right direction, and they don’t have to sell him, but I’m talking about the individual. Wolves are a brilliant side but sentiment does not come into it.

“He is a wonderful football player. He is in the same bracket as Sergio Aguero and Harry Kane – he is that good.

“If I was Ed Woodward, go and get him. You can’t get Kane right now. Kane is going to be tough and he’s had injury problems.

“Can you imagine putting Jimenez in a side that could potentially create more problems?”

If Woodward does follow Cundy’s advice then United’s attack will be frightening.

Dean Henderson could be United’s no.1 next season but for now, we’ve stuck David de Gea there as there’s been no suggestion from the club a change will be made just yet.

United could do with another top centre-back but again, while the likes of Kalidou Koulibaly have been linked with the club, it’s not clear whether any of these rumoured targets will be seriously pursued.

Grealish would be a welcome addition to Old Trafford, but as mentioned, getting the Sancho deal done seems to be a priority so we’ve let the Villa man out for now. Plus, Bruno Fernandes, Paul Pogba and Nemanja Matic were all in great form. 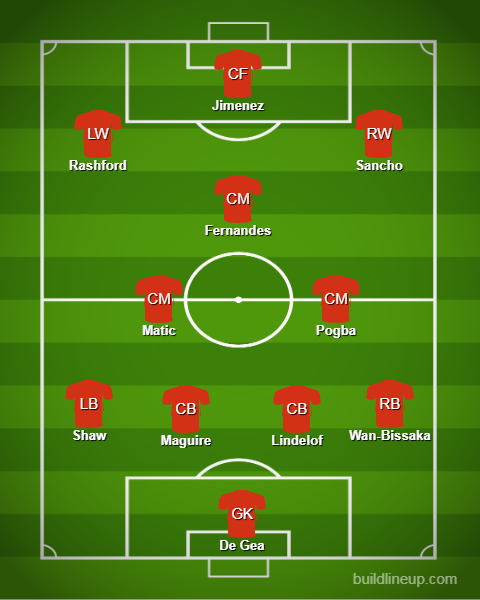 History of the club